Yes, only and only Facebook can do this. With help of socialmedia giant Facebook Gurubaj Singh is reunited with family after 11 long years. He left his home after being scolded by his mother, when he was only thirteen years old.

Eleven years ago, Ankush tried to ride his uncle’s bike and had an accident. He was beaten up and scolded by his uncle and mother for damaging the bike. At that moment his mother angrily threw Rs. 50 at him and said get lost. 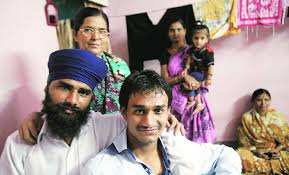 Angry young man left home, picked up by so many kind people finally settled down in Gurudwara in Ludhiana and became Ankush to Gurubaj Singh. However, Gurubaj missed his home and started searching for his family online.

He found his younger brother Santosh on Facebook and messaged him, which said, "I am your brother. Call me”. The message sent by him got prompt response from the family.
And finally they are reunited. Thousand thanks to Facebook.